In a continuation of our articles exploring the medical science of cardiac physiology, we shall be looking in-depth into Atherosclerosis. Associated with ageing demographics, plus increased signs of metabolic syndromes, Atherosclerosis is a dominant reason for mortality globally. Forest Medical, like all other companies working in the Medical Device Testing industry, is committed to ensuring that prognosis of specific health conditions (especially those linked to the heart) are diagnosed quickly and accurately. That is why we offer free technical support to ensure your medical diagnostic equipment is checked and maintained to the highest standards by a company that holds the ISO 9001:2008 award.

In this article, we shall be outlining how medical scientists from the Cardiovascular Research Center of Paris have successfully highlighted the mechanisms which underlie the development of Atherosclerotic Plaques. Notably, they exposed the shielding function of Autophagy, a process for cleansing and converting cellular components, within a cells lining of the arteries. These conclusions, printed in PNAS, contribute towards a better comprehension of the fundamental steps of development of these plaques and open the way to new medicines.

Atherosclerosis is a disease of the cardiovascular system that is characterised via deposition of a plaque which mainly consists of lipids (called atheroma) upon the interior lining of the arteries. The consequence of any plaques eroding or cracking can be dramatic concerning the sufferer: including myocardial infarction or cerebrovascular accident (CVA). 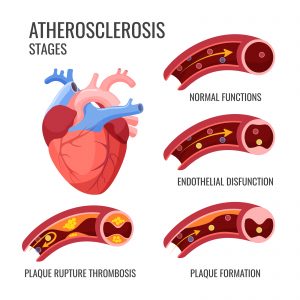 Cardiovascular risk factors are multiple: smoking, obesity, diabetes, high blood pressure, etc. Whereas these factors can be considered as standard, Atherosclerotic Plaque primarily develops in particular regions of the cardiovascular system, such as the arterial bifurcations and curvatures. Those places are characterised by the low friction forces exerted by the circulating blood. Conversely, arterial areas which are exposed to elevated friction are shielded from Atherosclerosis. The mechanism connected to this protective function of blood friction upon the advancement of atherosclerosis remains inadequately explained.

However, current research conducted by Chantal Boulanger and Pierre-Emmanuel Rautou has furthered our understanding of atherosclerosis. The study shows the crucial role of endothelial autophagy, which is the capacity of the inner cell lining of arteries to degrade and reuse their parts.

Autophagy is an intra-cellular mechanism which involves the cell degrading a portion of cytoplasm (contained within the membrane and nucleus) to cope with tension or a significant lack of nutrients. Researchers have recognised that this friction of the blood powerfully incites autophagy on the exterior of the arterial wall; allowing the endothelial cells to sustain a healthful physiological state plus preventing the advancement of atherosclerosis; thus, preserving them of cell-death, replicative loss of a cell’s power of division and growth.

The scientists then prevented the autophagy process on the exterior of the arterial wall and then observed a recrudescence of plaques in these arteriole regions confined to the growth of atherosclerosis. Endothelial Autophagy is thus the lost connection linking the strength exercised by circulating blood and atherosclerosis.

“These outcomes demonstrate that repressing autophagy is not favourable in atherosclerosis. On the contrary, explicitly stimulating autophagy, would limit the accumulation of atheroma plaques and therefore decrease the prospect of heart-attack or stroke, a real major challenge for public health, reasons Dr Boulanger.