What better way to study a disease and design therapeutic solutions than to create a model of the affected organ. This is what researchers at the Columbia Medical Center in the United States have managed to achieve. | Forest Medical Equipment Calibration

Reported in the journal Nature Cell Biology on May 2017, a US medical research team successfully created an advanced in vitro lung to learn more about respiratory infections; In vitro refers to the technique of performing a given procedure in a controlled environment outside of a living organism. The purpose of which is to grow the infection carrying cells in an environment conducive to their development; so-called “pluripotent” stem cells – that are, capable of differentiating into any type of cells in the body. 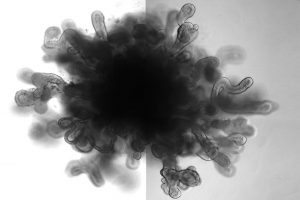 This lung model is the first to include bronchi and alveolar structures comparable to those of the human organ. It should make it possible to better test the efficacy of certain therapeutic drugs or regeneration of tissues.

In order to create this reduced human lung model, researchers placed pluripotent stem cells in a Petri dish, transforming them into lung cells. They then cultured them on a gelatinous 3D mold as the cells gradually became an organoid, a mini-organ produced in vitro. The scientists then infected the cells with a respiratory Syncytial virus or RSV, this organoid dumped tumefied cells, mimicking what would happen to a human’s cells. When the HPS1 gene is mutated, pulmonary fibrosis appears as in individuals suffering from this mutation.

Respiratory Syncytial virus (RSV) is the most common cause of respiratory infections in infants and young children, with a risk of developing to bronchiolitis or pneumonia. There is no vaccine or effective antiviral therapy available today.

As for idiopathic pulmonary fibrosis (with no known cause), it affects more than 100,000 people in Europe and the United States. The only known treatment today is a lung transplant. Hans-Willem Snoeck, one of the authors of the study, stated that “organoids, whether created from pluripotent stem cells or embryonic cells to the modified genome, may well be the best, if not the only, understand the pathogenesis of these diseases”.

Spirometry is breathing or ‘lung function’ test. It’s one of the most common tests people with asthma or people who are being tested for asthma, are given. Your GP or asthma nurse will ask you to take a deep breath and then breathe out as fast as you can and for as long as you can through a mouthpiece linked to a ‘Spirometer.’ You will have to blow a few times so your GP or asthma nurse can get an accurate result.

Medical equipment calibration is incredibly important and should be done regularly. Sophisticated devices require more frequent checks because of their complexity and the number of different things that could become inaccurate. Once a test and calibration is complete devices should be certified to show that they meet all requirements and regulations.