On August 2nd 2017, the journal Nature revealed that an international (American-Sino-Korean) team had managed to correct a defective gene in human embryos. The gene in question, named MYBCP3, is responsible when it is mutated from a serious disease affecting the heart muscle: hypertrophic cardiomyopathy (HCM). Presently without treatment, this disease, which affects one person in 500, can lead to heart failure or even sudden death in adulthood. | Forest Medical Equipment Calibration

Since the defective gene is usually carried by a single strand of DNA from one parent, only 50% of the embryos are affected. In vitro fertilisation followed by a sorting of embryos make it possible to select those that can be implanted in the mother.

The technique works, but it is incredibly complex and requires many embryos. In an attempt to improve this approach, an international team from Oregon Health & Science University in Portland has taken advantage of the opportunities offered by the Crispr-Cas9 technology, developing the process involving any DNA sequence with greater ease.

The experiment consisted of treating embryos resulting from the fertilisation of healthy women’s oocytes by spermatozoa of a man carrying the genetic abnormality. The idea is to suppress the defective gene in the embryo, thanks to Crispr-Cas9: it will be replaced naturally by the healthy gene of the mother during the replication of the cell. 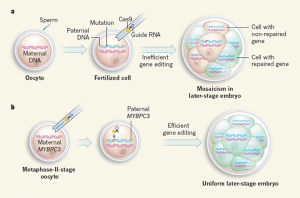 In a previous experiment in China in 2015, about two-thirds of embryos no longer had mutated genes after treatment. But the remaining third still showed traces of the defective gene; including a “mosaic” of healthy and abnormal cells. These mosaics pose many problems: they can mask the diagnosis of sorting, and do not make it possible to know whether or not the embryo will develop the disease during its development.

By introducing Crispr-Cas9 at an earlier stage – at the time of sperm introduction, and at stage II of the oocyte metaphase – researchers at the University of Oregon have been able to improve the rate of success of treatment: 72% of the embryos showed no trace of the mutated gene during their experiment. Above all, the absence of the so called mosaic effect in other embryos ensures that sorting can be carried out without ambiguity.

Beyond the ethical aspects, the potential of Crispr technology in humans seems to be on the right track. But the approach remains experimental – the embryos have been destroyed – and there is still room for improvement before clinical trials can be attempted in humans, both on the MYBPC3 gene and on other genetic disorders.

As we specialise in Medical Calibration Services, we can provide all the help you need to keep your home blood pressure monitor in good condition and working at its very best, ensuring that you can continue to receive accurate results and stay well informed about your health. Whether your monitor requires a repair or you simply wish to make sure it is in full working order and giving you accurate readings, we can provide the help you need.

Our service is fast and convenient for you, so you are not left without your vital medical equipment for long periods of time. We aim to complete the calibration and checking of your equipment within 24 hours, and if required, we can repair it free of charge. If you have any concerns about your home testing equipment, send it to us and let us help you keep an eye on your heart health with our medical calibration services and testing.